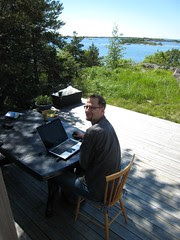 While midsummer eve was as cold and foggy as any I can remember, these following days have been beautiful. The winds are still a bit chilly, which can be deceptive since it makes you forget how much sun you're actually exposing your poor skin to. I spent most of a day mowing the grass around the house, and got myself a really superb redneck tan.

An hour or two ago, a White-tailed eagle circled a few times over our house, as usual supremely unimpressed by the gang of annoyed seagulls that tried to chase it away. A cuckoo is, well, cuckooing, in the distance, and the water is glittering. In fact, it's bloody hard to get any real work done in a place like this.

Over and out.
Posted by Richard Carlsson at 13:17 No comments:

When I planned my trip to California for the Erlang Factory conference, I followed a friend's advice and set aside a couple of days to go and see Yosemite Valley. I don't regret it - it was absolutely fantastic. Yosemite is about 4 hours drive east from San Francisco, up in the high Sierra Nevadas, and it's one of the most stunning landscapes you can imagine. Nothing I had read about it beforehand had prepared me for the feeling of actually being there and seeing this amazing valley in real life; not even Google Earth (although I recommend trying that for yourself - the 3D detail is really good). Of course I took a lot of photos, but it's not until now that I'm done going through the lot of them (discarding more than half), so I've waited with writing about the trip.

I stayed two nights in Curry Village, a camp site of permanent tent-cabins (complete with beds, but no heat) that are the cheapest option if you don't bring your own camping equipment and want to stay one or more nights in the valley. ("Cheap" of course being relative in a place like this; a

night at the Ahwahnee Hotel will set you back $500, off season.) Since this was at the end of April - the 27th to 29th, more specifically - the nights could still be cold, but from what I could see on the web before the trip, it seemed like it would not be colder than 5-10 degrees centigrade. Well, it turned out that the 28th was a brilliant day followed by a clear, cold night, as can be seen from the graph here. My sleeping bag was not quite up to the task, and I can't remember ever shivering so much in the wee hours. Still no regrets, though.

One of the things with visiting Yosemite is that you get a whole load of instructions from pretty much everywhere about how to keep anything with a smell (food and other things) stored safely to avoid problems with bears breaking in to cars, tents, etc. It's still not likely that you'll actually see a bear, but they can come roaming around the camp in the nighttime, they have an acute sense of smell, and have been known to even bend up car doors. So, on the day I arrived, I made sure to empty the car and put everything in the bear-safe locker, but there was a fair amount of activity around and it didn't really feel like any bears would ever come near the place. After getting settled, I walked over to the food pavilion to grab some dinner, and with the sun beginning to fade, I went for a stroll afterwards to see a bit of the place before dark. Following the edge of a part of the camp that had been blocked off due to some rock slides earlier, I walked for just a few minutes, and as I stopped and looked up among the trees and boulders, I suddenly realized that I was looking straight at a bear. Less than 100 meters away, I'm sure it was quite aware of me, but it didn't so much as dignify me with a look, not even when I took some pictures. It just slowly sauntered away, apparently circling the camp. A good start to the visit, I thought.

I didn't have any specific plan for the next day; I had simply brought my walking shoes and thought I'd improvise. Mainly, I expected to follow some simple trail around the valley floor, looking up at all the scenery. On a whim, though, I dropped by the hiking equipment store after breakfast and asked one of the guys there if he could recommend any particular trail and maybe sell me a map. Thanks to him, I decided to go on a route marked as "very strenuous", all the way to the top of the Upper Yosemite Fall, which he said was perfect for the season (spring being when the waterfalls are the most spectacular) and would give me superb views, much better than from the bottom of the valley. So with a map in hand, off I went towards the start of that trail, picking up some food and drink on the way. It was a brilliant day, and instead of trying to describe the hike here, I'll just point you to the pictures I took. I started out around 10 in the morning, was up on the top at midday, and got back down again at four, very tired but happy.

After the second, very cold night in Curry Village, I had to drive back to San Francisco again, but first I made a stop at one of the few places where you can see giant sequoia trees. They were quite impressive, but I think the feeling that remained with me was one of sadness - none of the surviving trees were nearly as grand as the ones you could see in the black-and-white photographs on the signs, with lumberjacks posing beside huge sequoias that they were in the process of chopping down.
Posted by Richard Carlsson at 18:25 No comments: